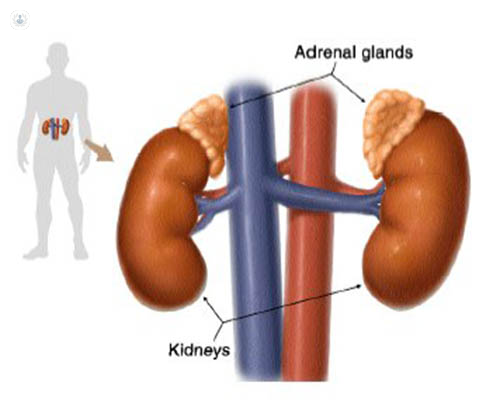 What are adrenal gland disorders?

Adrenal gland disorders are a group of conditions affecting the adrenal glands, which are endocrine glands located above the kidneys. These glands are responsible for producing a variety of hormones, which include adrenaline, steroid hormones such as androgens, and corticosteroids. These hormones help the body to control blood sugar, react to stress (e.g injury/illness), regulate blood pressure, and burn fat. Thus, if the adrenal glands are dysfunctional, this can result in an endocrine condition. There are various types of adrenal gland disorder, including Cushing’s syndrome, Addison’s disease, adrenal gland tumours, and hereditary disorders.

What are the symptoms?

As there are various types of adrenal gland disorders, symptoms will vary depending on the condition.

Cushing’s syndrome symptoms are more commonly: upper body obesity, high blood pressure, weakness in the muscles and in the bones, high blood sugar levels, skin conditions such as acne or marks/streaks on the abdomen, slow growth rates (in children), and irritability or depression.

Congential adrenal hyperplasia symptoms can be mild or more serious, and symptoms may even be so mild that they do not cause the individual problems. Symptoms of mild CAH include: early signs of puberty, acne, irregular periods, excess facial hair in women, and a shorter than average final height (in younger adults).

Tumours of the adrenal gland can cause a variety of symptoms depending on the hormone which the tumour is overproducing. Some tumours do not produce hormones, but damage the pituitary and do not allow it to secrete the right level of hormones. As a result, the adrenal glands will not function as they should, either.

What is the treatment?

Treatment depends on the adrenal gland disorder affecting the individual, but generally treatment will be surgical or medical. Treatments include:

This website uses cookies to improve your experience while you navigate through the website. Out of these cookies, the cookies that are categorized as necessary are stored on your browser as they are essential for the working of basic functionalities of the website. We also use third-party cookies that help us analyze and understand how you use this website. These cookies will be stored in your browser only with your consent. You also have the option to opt-out of these cookies. But opting out of some of these cookies may have an effect on your browsing experience.
Necessary Always Enabled
Necessary cookies are absolutely essential for the website to function properly. This category only includes cookies that ensures basic functionalities and security features of the website. These cookies do not store any personal information.
Non-necessary
Any cookies that may not be particularly necessary for the website to function and is used specifically to collect user personal data via analytics, ads, other embedded contents are termed as non-necessary cookies. It is mandatory to procure user consent prior to running these cookies on your website.
SAVE & ACCEPT